In 1997, God gave me a picture of an African village on a hill. There were clusters of small homes surrounded by children, running and laughing. Mothers were sitting on the steps of these houses interacting with one another. The church was in the centre. There were schools and a skills/business development centre. I saw fields of vegetable gardens. He told me to build the village so that the orphan children will come to know Him as their Father; to create jobs for the rural communities so that they can sustain their families; and the Government will come and see why it works, and we can point them to the Cross.

Tich was a South African sports star who lost it all to alcohol. Joan had recently lost her husband. Their lives were at rock bottom when grace showed up and inspired these two middle-class South Africans to move past the racial prejudices of the Apartheid era and launch a ministry together.

Tich Smith grew up in a white middle-class home in Johannesburg and went to university in Pietermaritzburg. He played rugby for Natal at the age of 19 and cricket for Natal and South Africa. He had everything anyone could wish for but ended up in a home for alcoholics at the age of 35. Tich gave his life to Jesus in 1986 and chose to walk His way. In 1991 he met and married Joan, who had lost her first husband, and out of the ashes of their lives, God brought them together for His purposes.

In 2008, Tich and Joan felt the call of God to start the Lungisisa Indlela Village (LIV), which would become the urgently needed residential facility, for orphaned and vulnerable children. They visited the Watoto villages in Uganda where they saw 19 years of successfully transforming broken lives. The vision was the same. They brought the model back to KwaZulu Natal.

We are convinced that the church is the answer and has the resources and skills to make the difference. No longer can we sit in our church buildings and not hear the cry of the Father’s Heart for the fatherless. We are the church. We have the Father Heart of God within us. Together, in partnership with business and government, we can do it. 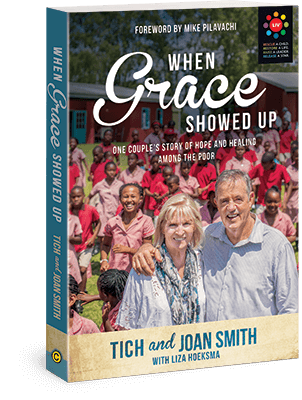 WHEN GRACE SHOWED UP

Read Tich and Joan Smith’s story of hope and healing among the poor. When Grace Showed Up tells the story of LIV and the amazing provision, kindness and mercy God has shown along the way.