Mum Nokubonga’s story of hope started in 2013, when God unexpectedly changed her life. She grew up attending a township school but at the age of 14, she started attending an all-girls college. She didn’t speak English and began to carry shame for this and a desire to understand and perfect the language began to grow. At 15, she fell pregnant and had her first child. She dropped out of school to raise him for a year as well as her sister’s child. She returned to school and finished her education at 23 and began to work at a Christian radio station where she worked in both the English and Zulu departments.

God began to sharpen her gift for language and translation. The shame she carried for not knowing English began to slip away and instead became a drive to empower and upskill herself. “I came alive through this journalistic skill I gained” says Mom Noku, as she is lovingly known to everyone at LIV. At this radio station, she was also constantly hearing and being filled with the gospel of Christ. She heard about a church event on the radio and decided to go, not expecting to be radically changed and meet Christ that very night…

Rows of red houses and a cross on the hill

Noku had her second child shortly after this life altering event and became dedicated to pursuing Christ but was shunned by a lot of her family and friends. “I was suffering because of Christ, yet I could rejoice,” she says with a content smile. She moved jobs and began to work as the translator for an AIDS institution interviewing sick women. In 2013, she bought land in Mahlabatini and owned a small shack that “felt like a mansion.” She had to travel very far to and from work every day, leaving her children after school with no one to watch over them and nowhere safe to play. One day outside the bus stop, she turned around and saw rows upon rows of beautiful red houses with a big white cross on the hill – LIV Village. She heard that it was a boarding school for children and had the idea to ask them to look after her children for a few hours every day until she got home. After many failed attempts she received a phone call one day from Joan Smith asking her to come to the village. She practically ran to the gates and sat down with Joan. To her surprise, she was offered a role on the village and a place to stay. She expected a house similar to the one in Mahlabatini but was met by a beautiful red house with three bedrooms and two bathrooms. She immediately asked: “Where are the other people who live here?” unaware that it was all for her and her children. She had safe electricity, gas to cook and most importantly a Christ-centred community for her children to grow up in. She began to translate here at LIV at Sunday church services and Monday morning devotions and currently serves as the Personal Assistant to the CEO of LIV Durban. “All the years of translating had an intentional purpose,” says Noku. “Everything He gives us, He wants to use for the benefit of the gospel. We are rescued, restored and one day we will be released and his plan will be perfected.”

Noku’s oldest child was one of the first Grade 12 students who were released as stars in 2018 and is currently doing an internship and in house training in Logistics. He is faring extremely well and is a solid, strong boy who we all are so proud of. Her daughter is a star on the sports field and received KZN colours for running in 2019. 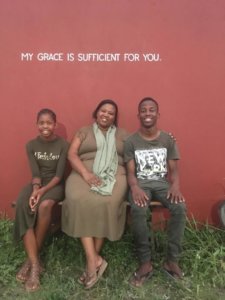 Noku and her two beautiful children in front of one of the LIV homes.

LIV exists to write stories like Nokubonga’s. If you would like to help us rewrite stories of individuals in our surrounding communities, get in contact with us today and find out how you can be a part of the beautiful legacy that LIV leaves behind. Contact info@liv-village.com.